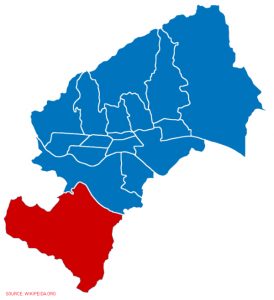 Brezovica is the most southern district of Zagreb. At the most recent census, in 2011, the district had a population of 12,030, relatively few given the size of the district. It is one of the more rural areas of Zagreb. In the middle of a park you can find an 18th century baroque castle, belonging to the Draskovic family. Large murals can be found in its entry hall. Today it is owned by the church and is not well maintained, leaving it in poor condition. The district borders only one of the other districts in Zagreb: Novi Zagreb-zapad in the north.