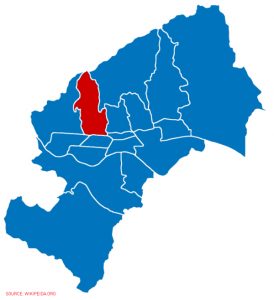 Črnomerec is a western district of Zagreb, bordering Gornji Grad–Medveščak in the east, and Donji Grad in the south-east. The first railway station of Zagreb (Zagreb Zapadni), built in 1862, is found in Črnomerec. The district has a lot of old army barracks. Most of these still stand, but have received a new destination, as e.g. a factory, school, or courthouse. The Rudolf Barracks, the most famous ones, are a protected architectural monument now. Next to this, the district contains a monumental statue of the first president of Croatie, Franjo Tudman, on a square that was named after him.